Gorse (Ulex europaeus) is an evergreen, woody shrub in the pea family (fabaceae). Gorse re-sprouts from the crown when cut, grows up to 13 feet tall, and can live 30 years. Gorse illuminates the landscape with endless yellow flowers that reach peak bloom in winter. Although seedlings are poor competitors that struggle in shade, seed can last many decades, germinating profusely after disturbance by logging operations or beachfront erosion. Over time, nitrogen fixing nodules on gorse roots can leach nitrate into the watershed and reduce water quality.

Native to western Europe, gorse was introduced to coastal Oregon in the 1800s for livestock containment hedging. Mature gorse plants are completely covered in sharply pointed spines. Gorse is listed as noxious along the entire western coast of the U.S., including Hawaii. The epicenter of the infestation occurs near Bandon, OR where gorse fueled a number of wildfires. Coastal homeowners express concern with rapid mechanical or chemical treatment that could potentially leave the embankments supporting their property exposed to the elements. Biocontrol is a critical tool in combating remaining infestations, with previously released agents reducing seed production (Exapion ulicis) or weakening plants (Tetranychus lintearus).

The host-specific gorse thrips, Sericothrips staphylinus, was first permitted for field releases in November, 2019. The thrips family contains some 6,000 species, each with their own life cycle, feeding behavior, and habitats. This particular species is native to western Europe; collected in Portugal, England, and France. It has been safely utilized as a biocontrol agent in New Zealand, Australia, and Hawaii for many years. Testing conducted at Oregon State University showed the thrips cannot survive on any of 135 congeners, ornamentals, crops, and T&E plant species.
Multiple generations of thrips can build up on plants in one year’s time. Thrips rasping mouthparts drain cell contents leaving host plant material pale and speckled in appearance. In lab testing, thrip feeding was shown to be especially damaging to seedlings, reducing height and outright killing some seedlings after two months. Even gorse plants several feet tall do not reach their full potential height or biomass when thrips feed on freshly growing branch tips. 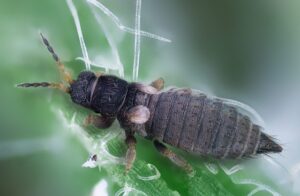 Continued pressure on gorse from new biocontrol agent development like the gorse thrip is critical for protecting our western coastline, and well-inland. Through efforts of groups like the Gorse Action Group (http://gorseactiongroup.org/), gorse is currently being limited to less than one percent of the over 16 million acres specifically susceptible to gorse in Oregon alone. 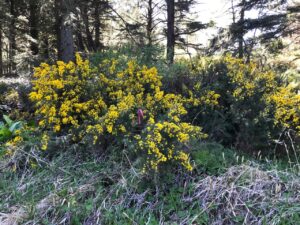 Partnerships with private, municipal, and state landowners along the south coast of Oregon are developing field nurseries for 2020 thrips establishment, study, and redistribution. Greenhouse colonies are also being used to rapidly build thrips populations. Eventual multi-state sharing and reduction of gorse invasion potential on a larger regional scale should bring incalculable value in sustainably restoring our lands with little cost. For additional information, contact jprice@oda.state.or.us.

What’s the Deal with Gorse??

A plant that is both non-native and able to establish on many sites, grow quickly, and spread to the point of disrupting plant communities or ecosystems. (Source)

A plant that is a part of the balance of nature that has developed over hundreds or thousands of years in a particular region or ecosystem. (Source)

A plant introduced with human help (intentionally or accidentally) to a new place or new type of habitat where it was not previously found. (Source)

Any plant or plant product that can directly or indirectly injure or cause damage to crops (including nursery stock or plant products), livestock, poultry or other interests of agriculture, irrigation, navigation, the natural resources of the United States, the public health, or the environment. (Source)